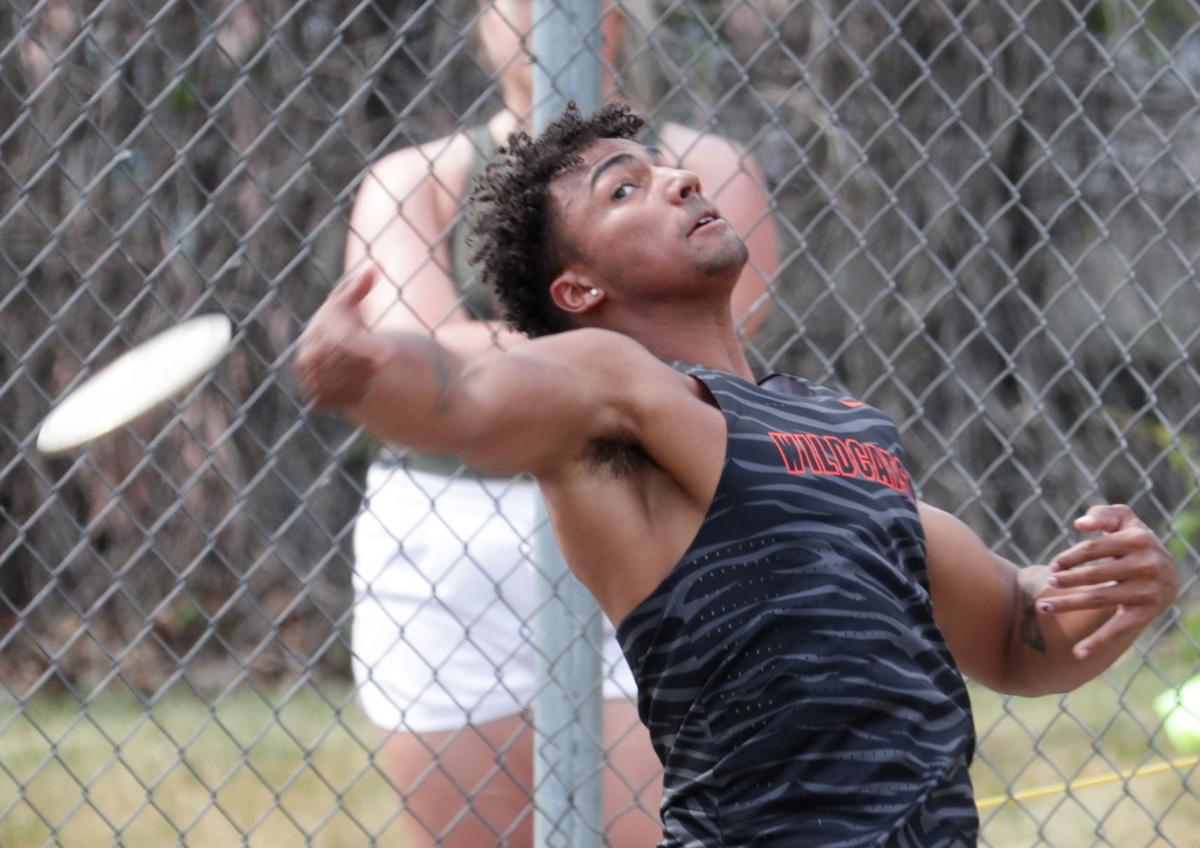 Verona's Jackson Acker broke the Mansfield Stadium record for the discuss last week with a heave of 196 feet. 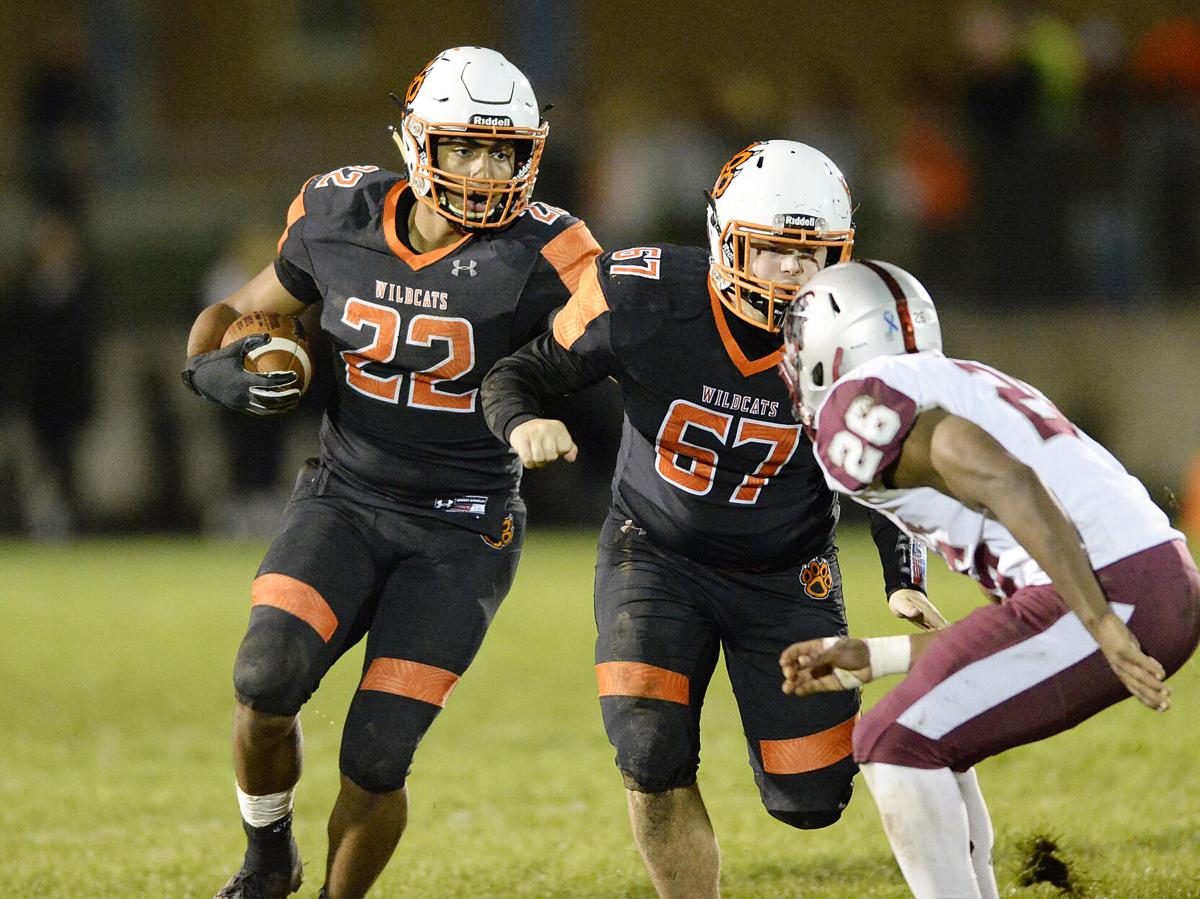 Jackson Acker was a first-team selection at running back on The Associated Press All-State football team in the WIAA’s alternate fall season during the spring.

During a conversation last summer, Verona’s Jackson Acker couldn’t be sure what to expect athletically in the 2020-21 school year amid the COVID-19 pandemic.

But Acker, hoping for the opportunity to compete, was certain about his goals for his senior season in track and field.

He said he was determined to establish personal bests and win a state championship after the WIAA canceled the 2020 spring season due to COVID-19.

“I’m hoping to have a big senior year and hope to make a statement my senior year,” Acker said at that time.

So far, with the WIAA Division 1 state track and field meet this week, the University of Wisconsin football commit has made a statement. And it’s been heard: Loud and Clear.

The 6-foot-2, 225-pound Acker embarked on a record-setting track and field campaign after he was a first-team selection as a running back on The Associated Press All-State football team for the WIAA’s alternate fall season this spring.

“It’s definitely been weird this year,” Acker said after winning the discus and shot put and anchoring Verona’s victorious 400-meter relay at the WIAA Division 1 sectional Thursday at Mansfield Stadium. “We are still doing track after graduation. I could be downtown (in Madison) with the football team right now. But I just wanted to finish out my senior season and see if I could set some records, maybe. And I did.”

Acker recorded another personal best and improved on his school record when he threw the discus 207 feet, 6 inches at the Division 1 regional June 14 in Middleton. That throw moved him up the honor roll to second nationally, according to athletic.net rankings.

Several of his efforts this season — including 203-10 — have topped the previous school record of 196-1 by Luke Sullivan in 1994. Sullivan was a three-time WIAA Division 1 state champion and a two-time national champion. Sullivan remains the WIAA state-meet record holder (193-3 in 1993).

Winning a state title and breaking the discus state-meet record are among goals Acker has in his sights at the Division 1 state meet, scheduled Saturday at UW-La Crosse’s Veterans Memorial Stadium. The Division 3 meet will be Thursday and the Division 2 meet Friday.

Acker is the top seed in the discus and seeded second in the shot put.

“I just want to get in a good week of practice, getting me ready for the state meet,” said Acker, who also had set a school record in the shot put. “Then, once I’m there, just doing what I can do and performing how I can on that given day. So, that’s the challenge — to bring it all together at a one-day event. If I do that, I definitely have the potential to win.”

Acker had hoped to win a state title in the discus in 2020 and, while understanding the decision to cancel that season, was still disappointed.

“Obviously, we didn’t get a season last year, so we didn’t really have an opportunity to see what he can do,” Verona boys track and field coach Joff Pedretti said. “So, it’s been really awesome to see how far he’s been able to take it. … If you count how short the season was and the fact it overlapped with football, he’s probably missed a third of his high school track and field experience and still has been able to compete at this level and beat Luke Sullivan’s records.

“We are talking over 25-year-old records. (Sullivan) has been a legend. He was a senior my freshman year in high school. Those are records you didn’t think would ever get broken. (Acker) didn’t just break it once but now several times and he just crushed it more than 10 feet and beyond.”

Acker said he wasn’t certain how he would perform this spring.

“Because of last year, missing the whole year, I didn’t really know where I was at,” Acker said. “It turned out a lot better than expected. I was really happy I decided to stick with it.”

Acker, who said he’s been recruited at UW as a running back, could have left to begin his college career.

“We worked it out (with UW),” Acker said. “They are pretty flexible about it. It’s mostly just summer workouts. They said, `Just come on down when you are done with track.’ That’s the plan.”

Acker said he focused on weightlifting, nutrition and workouts leading into the season. He trimmed to 200 pounds for track in past years, but didn’t this year because he also was training for football.

His 10.93-second time in the 100 has placed him fifth in school history, according to Pedretti.

“You have to remember when COVID hit, kids had several options,” Pedretti said. “Start watching Netflix and playing video games all day long and completely forget there will be sports starting again. Or they could have gone to the gym here and there and done a little bit. Or you could actually keep working.”

Said Pedretti: “I can imagine in the nine months, or whatever it was that he was unable to have a direct (high school) coach, he was doing a lot more than the average person and made that progression because of that.”

Verona primarily had dual meets this season. Pedretti said that made the Paul Frank Invitational in Sun Prairie, the regional and the sectional important to Acker because he hadn’t been in meets with many spectators or competitors since 2019. Plus, the sectional provided top-flight competition.

“I think what was awesome (at the sectional) was the competition was awesome,” Pedretti said. “There were three of the top five guys in the state all together (Acker, Holmen’s Kaden Banks and Baraboo’s Jake Schaefer). We had three guys throwing over 185 feet. That was his first time experiencing that. … This year, he’s been winning meets by 50-plus feet. Now he gets in a meet where two other guys can throw over 185. That’s an adjustment.”

Pedretti added: “All we’ve had this season was duals and one invite, the Paul Frank Invite at Sun Prairie. He had already broken the school record at that point at 201. Now he goes into that meet and his first throw was terrible. And he comes out of the circle and he said, `Coach, I haven’t thrown in front of a group this big in over two years.’ And that was a six-team invite. He came back to throw pretty well in that meet. … But he needed to adjust to that. (At the sectional), it’s like, `Oh, here are other guys who can launch it.’ ’’

“I’d love to see Jackson break it, but either way those discus records stay in the family,” Joff Pedretti said.

“We have them both at Verona — the boys and girls records. I do hope he gets it, extends it, makes it a Verona record for an even longer period of time. … It would be cool to see.”

“He’s a quality kid, a great student,” Richardson said. “He could have been recruited anywhere, but his dream was to go to Wisconsin, where his mom works. When (the Badgers) offered, it was a no-brainer for them. He could gain 20 pounds and play outside linebacker or he could stay as he is and play running back. Any way you could look at it, he could help a team. … He’s big, fast, smart. He’s got everything.”

“I’ve had guys who are half as good and they walk around like they are the best thing ever and their head is this big and they’ve accomplished half as much,” Pedretti said. “So for him to accomplish all he has and still keep a pretty level head is really good. I think that’s a big reason he will be successful with the Badgers next year.

“He’s fast, he’s strong. It’s pretty impressive when you put it all together.”

Verona's Jackson Acker broke the Mansfield Stadium record for the discuss last week with a heave of 196 feet.

Jackson Acker was a first-team selection at running back on The Associated Press All-State football team in the WIAA’s alternate fall season during the spring.