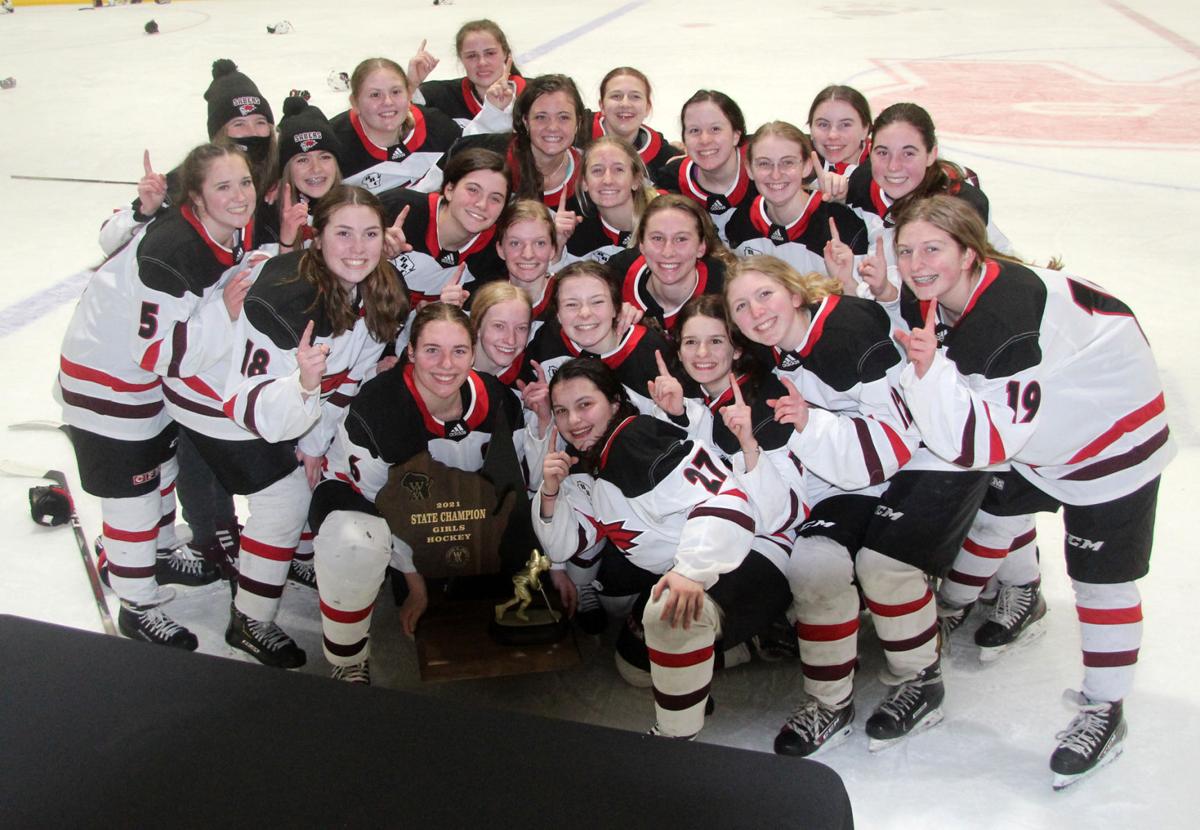 The Chippewa Falls/Menomonie girls hockey team poses with its newly-won state championship trophy after defeating the University School of Milwaukee 3-2 in overtime on Saturday in Wisconsin Rapids. 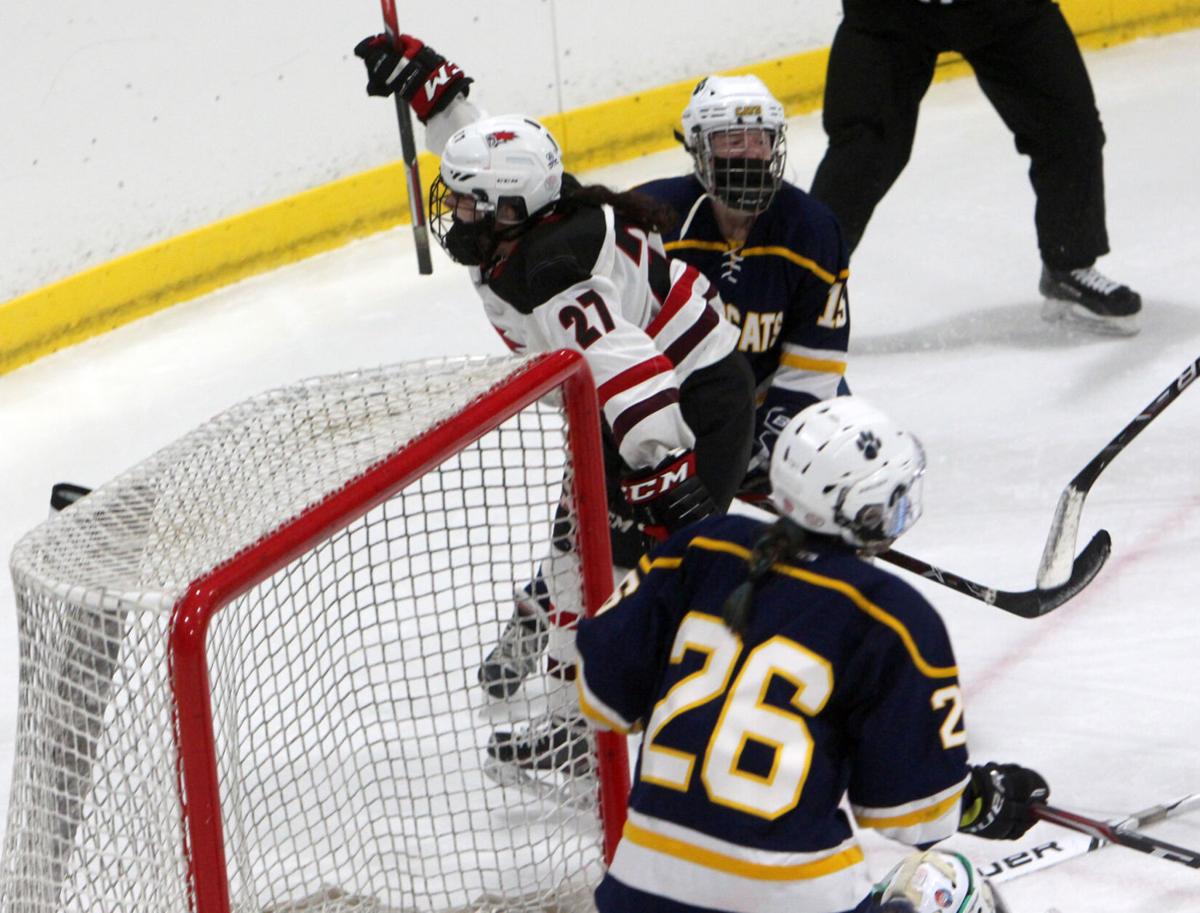 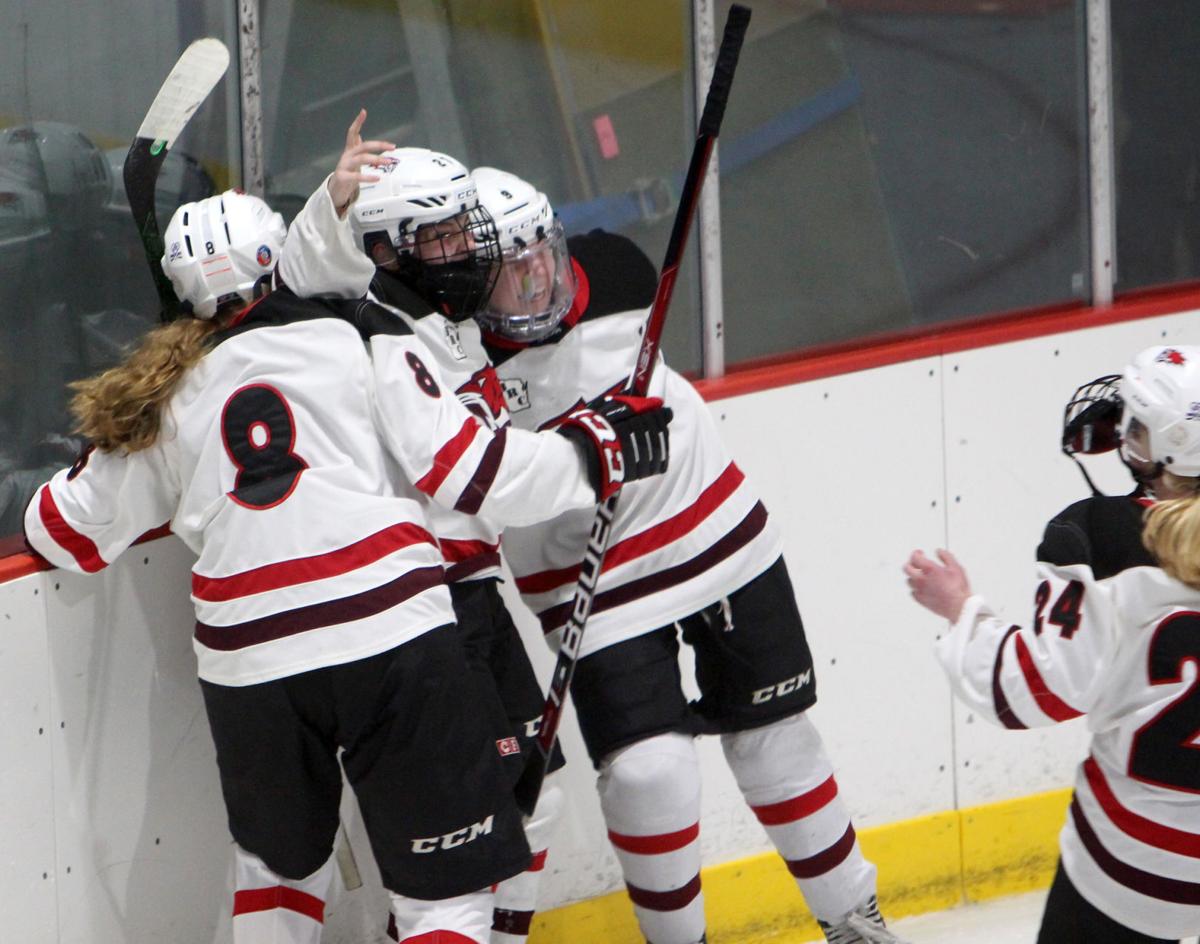 WISCONSIN RAPIDS — Joey Schemenauer was in the biggest moment of her high school athletic career and had just one thought — don’t miss.

The sophomore took a feed from Brianna Buonincontro and beat goaltender Molly Jex 3 minutes, 20 seconds into overtime to secure the Chippewa Falls/Menomonie girls hockey team a state championship with a 3-2 victory over the University School of Milwaukee on Saturday afternoon.

The sophomore-to-sophomore connection on the winning goal was the only time the Sabers led in the game.

Schemenauer picked up a tripping penalty in the third when the game was tied, and the Wildcats took advantage as Jordan Bonk scored on the power play to give the University School of Milwaukee a 2-1 lead at the 6:52 mark. The sophomore got the chance to make amends, and she did with her second goal of the playoffs and seventh of the season.

“All I thought was don’t miss because that would not be good,” Schemenauer said. “I just have got to thank Brianna for the perfect pass she gave me. It was amazing to be able to put that puck in the net for our community and our team and our coaches who worked so hard for this.”

Chippewa Falls/Menomonie (14-6-1) tied the game at two less than three minutes later when Ms. Hockey Wisconsin Sidney Polzin delivered a power-play snipe past Jex to even the game, one that had just one goal in the first two periods.

“I think we all just came here with a little nerves, but they sat down once we got going,” Polzin said. “I think the big difference was being positive in the locker room and knowing that we are capable of coming back from a deficit.”

Ella Ausman opened the scoring for the Sabers 40 seconds into the third when her goal stuck past Jex before a collision knocked the net out of place. A review of several minutes came to look over the goal, which was allowed.

“It was a battle this afternoon,” Chippewa Falls/Menomonie coach Tony Menard said. “We had to compete for the whole game. Luckily we were in this situation on Wednesday and to go out there and have a sophomore group get that goal, it feels really good. They wanted this for their seniors. We had a couple seniors step up with a goal and put the puck in the net tonight and to see Brianna and Joey go out there and finish it. It was so surreal.”

The Sabers controlled the majority of the first period before a turnover in their own zone late gave the Wildcats a scoring opportunity Emily Mueller would take advantage of, knocking the puck past goaltender Caroline O’Dell with 10 seconds left to put the University School of Milwaukee ahead 1-0. Mueller’s shot was the first one on goal in the game for the Wildcats (18-4).

“We got in the locker room, and coach just said we’ve came back before,” Schemenauer said.

It was the second overtime win in four days for the Sabers, who advanced to the championship game when Emma-Lyn Stephenson scored a power-play goal in a 4-3 win at Central Wisconsin on Wednesday.

Chippewa Falls/Menomonie outshot the Wildcats by a 28-15 margin, including a 17-6 spread in the first two periods, but Jex was up to the task between the pipes coming off a shutout of Eau Claire Area in Wednesday’s other semifinal.

“We were getting shots and it just didn’t seem that the puck was going to go in and then it just started to come in the third period,” Menard said.

Caroline O’Dell made 15 saves in net for the Sabers while Jex stopped 25 of 28 shots for the Wildcats.

Five years ago, the Sabers lost by 10 goals in their lone playoff game. The co-op of teams from Chippewa Falls, Menomonie and McDonell has been methodically working its way up the ladder in recent years before the breakout 2020-21 campaign. Chippewa Falls and Menomonie first teamed up for the 2010-11 season with McDonell joining in later years.

And now the Sabers are state champions.

“This group of girls is amazing,” Polzin said. “To finally do it, to hang our banner at home is amazing.”

Logan and Marley Hughes, Carter and Emma Stelter, Gavin and Aubrey Dorn and Miles and Sydney Flanagan are each a part of state-bound Mack teams with both the McDonell boys and girls basketball teams advancing to the Division 5 state tournament this year.

The top-seeded and top-ranked Hustisford boys basketball team powered past McDonell 69-35 on Thursday evening in the Division 5 state championship game in La Crosse.

No boys basketball team in the state of Wisconsin has advanced to state as many times since 2016 at McDonell. But this year's trip for the Macks has been much different than the others as the team has worked through unprecedented circumstances heading into Thursday's Division 5 state semifinal against Green Bay N.E.W. Lutheran.

The McDonell boys basketball team has earned a No. 2 seed for the Division 5 state tournament and will meet No. 3 Green Bay N.E.W. Lutheran in…

Logan Hughes led all scorers with 25 points and the McDonell boys basketball team made 12 3-pointers overall in a 63-51 Division 5 sectional championship victory over Turtle Lake on Saturday, sending the Macks back to the state tournament.

A spark late in the first half turned into a fire that lasted the entire second half as the McDonell boys basketball team powered past Green Bay N.E.W. Lutheran 67-40 in Thursday afternoon's Division 5 state semifinal matchup at the La Crosse Center.

For the McDonell boys basketball team, a Division 5 state runner-up finish added to what has already been a strong 2020-21 season of athletics.

Anna Geissler left a significant impact on the McDonell girls basketball program as the lone senior on a team that got to the WIAA state tournament for the first time.

The McDonell girls basketball team has had a few prolonged stretches without games since the start of January. But the Macks have been able to lean on their defense to keep getting wins as McDonell heads for Northwood in a Division 5 sectional semifinal contest on Thursday.

The Chippewa Falls/Menomonie girls hockey team poses with its newly-won state championship trophy after defeating the University School of Milwaukee 3-2 in overtime on Saturday in Wisconsin Rapids.