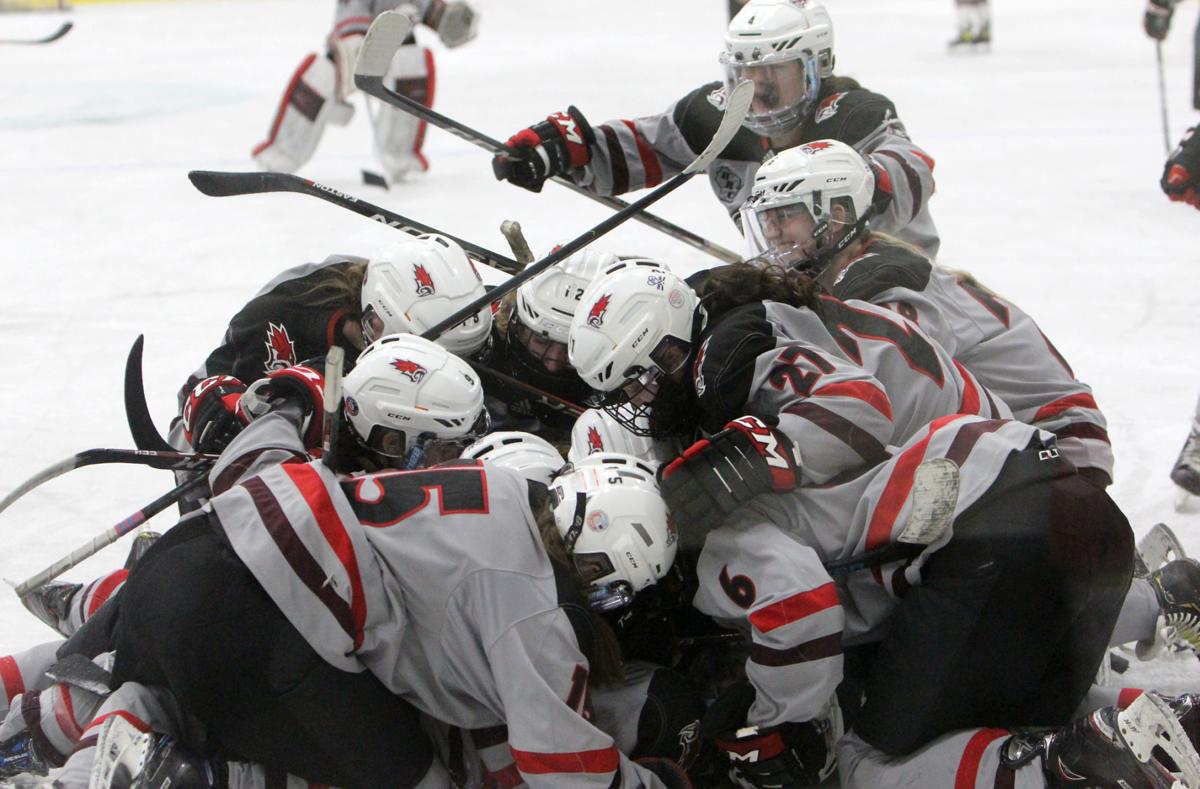 The Chippewa Falls/Menomonie girls hockey team piles on sophomore Emma-Lyn Stephenson after she scored the game-winning goal in overtime on Wednesday evening in Schofield. 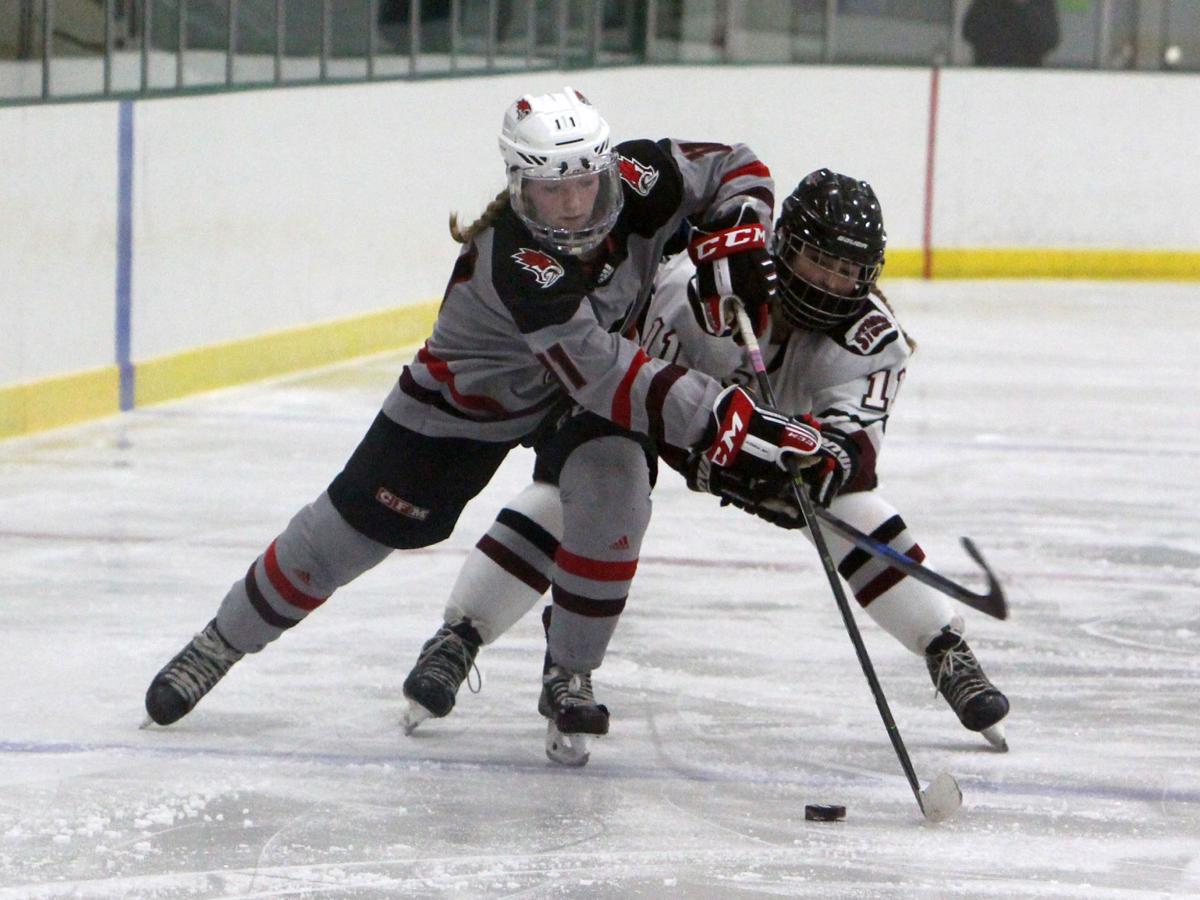 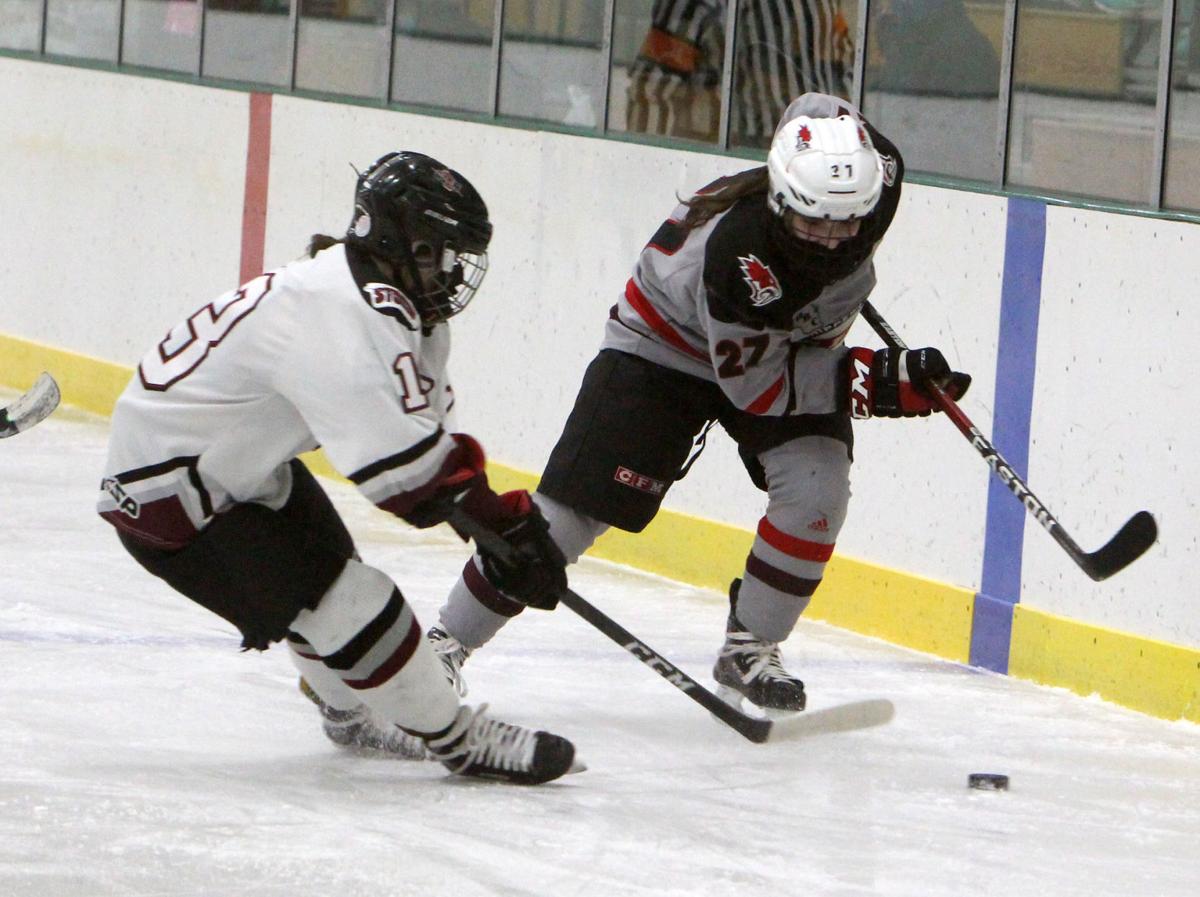 Chippewa Falls/Menomonie's Joey Schemenauer moves the puck up the ice on Wednesday in Schofield.

Saturday the Sabers will play for a state championship.

The Sabers (13-6-1) will face the University School of Milwaukee at approximately noon on Saturday in Wisconsin Rapids for the title.

Stephenson’s winner came on the power play and after a lack of success early with a 5-on-4 advantage, Chippewa Falls/Menomonie buried one when it mattered most as the sophomore worked her way through the Storm’s defense before beating goaltender Chloe Lemke with a shot wide in the slot to send the Sabers to the co-op’s first state title game.

Four different players found the net as the Sabers were able to rely on their depth for goal scoring.

“Especially on this size of an ice, we had to get our three lines going as much as possible and to have four different girls score was great,” Chippewa Falls/Menomonie coach Tony Menard said. “Sid(ney Polzin) didn’t feel like she had to carry the team on her back. She had a great game in the sectional final but before that she hadn’t got the puck in the net. We’ve really been relying on our depth throughout the playoffs and tonight was just another example.”

Polzin was named Ms. Hockey for the state of Wisconsin on Tuesday and didn’t have to wait long to put her team on the board first as she scored just shy of six minutes into the game to stake the Sabers to an early 1-0 lead. Chippewa Falls/Menomonie earned a pair of power-play chances in the first but weren’t able to capitalize with many shot opportunities. The Storm ratcheted up the offensive intensity late in the first period, but goaltender Caroline O’Dell and the defense stood strong to keep Central Wisconsin out of the net.

Business picked up in the second period as both teams found the net twice, starting when Central Wisconsin’s Lauren Ellis sniped a shot past O’Dell to even the game at one. Abigail Martin returned the favor with a shot from deep in the zone of her own to put Chippewa Falls/Menomonie back out front 2-1 with a lead that didn’t last long before Gabrielle du Vair knocked home a rebound off a shot from Hailey Piskula.

Sophomore Addie Frenette had the final tally of the second on her goal with less than three minutes left in the second, helping send the Sabers to the third with a 3-2 advantage.

Logan Crawford tied the game at the 4:45 mark of the third period and the score stayed that way for the rest of regulation, even as the Storm put many pucks on net late.

Overall Central Wisconsin held a 31-17 advantage in shots, but the Sabers made the most of theirs. O’Dell stopped 28 shots in net for the victory between the pipes.

“I think just the amount of shots we were giving up, they weren’t super high quality,” said Menard, who was named the Girls Wisconsin Hockey Coaches Association’s Coach of the Year on Tuesday. “We weren’t giving up a lot in the middle of the ice. We were wanting to go into the game making sure the shots were staying outside and knew that they had a little bit of an advantage being out here (at the rink) the last couple days. We knew it was going to take us a couple periods to really settle in and Caroline played great.

The University School of Milwaukee shut out out Eau Claire Area 1-0 in a contest held at Chippewa Area Ice Arena earlier in the day.

Chippewa Falls/Menomonie advanced to the co-op’s first-ever state tournament after scoring a 7-4 win at St. Croix Valley on Saturday in the sectional finals. Prior to that the Sabers knocked off the top seed in the section Western Wisconsin 3-2 in the sectional semis on Feb. 9.

Central Wisconsin made its return to the state tournament after a year away with an impressive 5-1 victory over two-time defending state champion Fox Cities in the sectional finals. Chippewa Falls/Menomonie scored a 6-1 win over the Storm on Dec. 28, Wednesday’s matchup with much different expect for the victor.

The Sabers never trailed, but never led by more than one as the teams traded goals throughout.

But Chippewa Falls/Menomonie scored first and it scored last.

And now a place that was thought unthinkable for the co-op of players from Chippewa Falls, McDonell and Menomonie to get is now very real.

“It doesn’t feel real, it really doesn’t I’m going to be completely honest it does not feel real,” Martin said of playing for a state championship on Saturday.

What To Know: For updates from the game, follow Brandon Berg on Twitter (@Brandon_Berg) and check Chippewa.com throughout Saturday as well as the Monday edition of The Chippewa Herald.

Ten different players have scored goals in the playoffs for the Chippewa Falls/Menomonie girls hockey team. That scoring depth will be tested in Saturday's state championship game against a strong University School of Milwaukee defense in Wisconsin Rapids.

The Chippewa Falls/Menomonie girls hockey team piles on sophomore Emma-Lyn Stephenson after she scored the game-winning goal in overtime on Wednesday evening in Schofield.

Chippewa Falls/Menomonie's Joey Schemenauer moves the puck up the ice on Wednesday in Schofield.