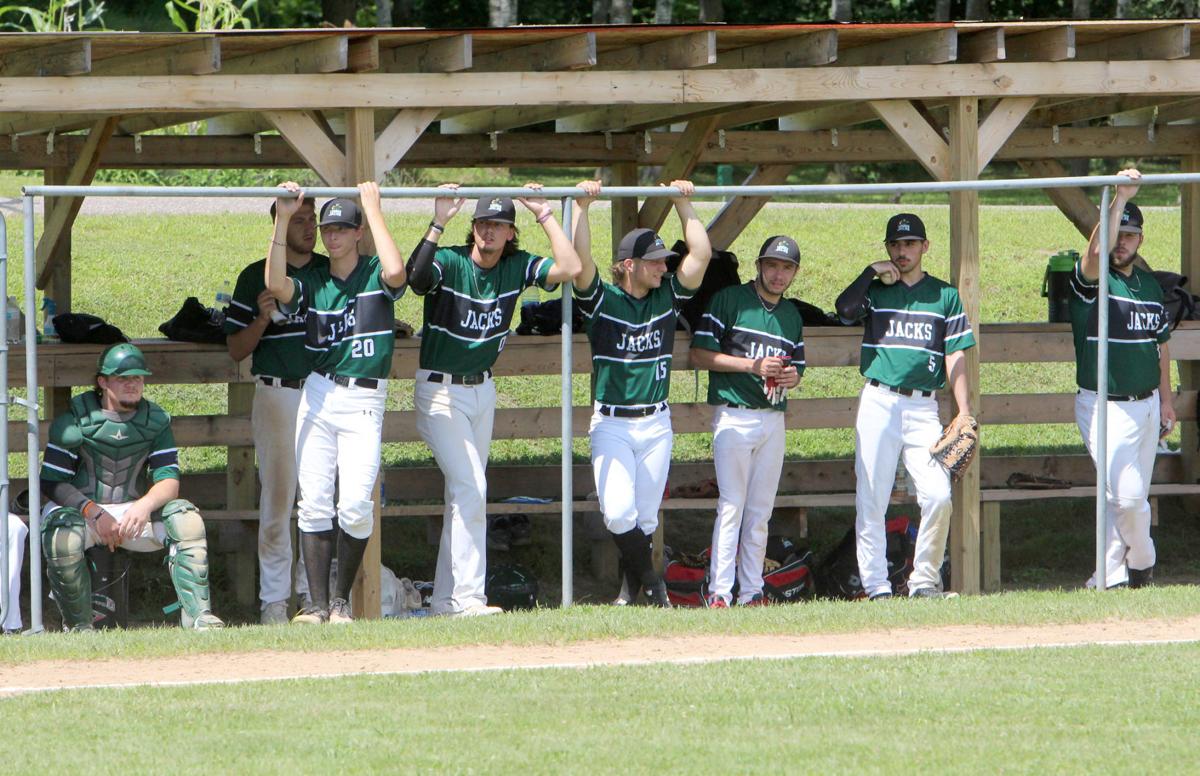 Several members of the Chippewa Falls LumberJacks look on during Saturday's game against Cadott in Jim Falls. 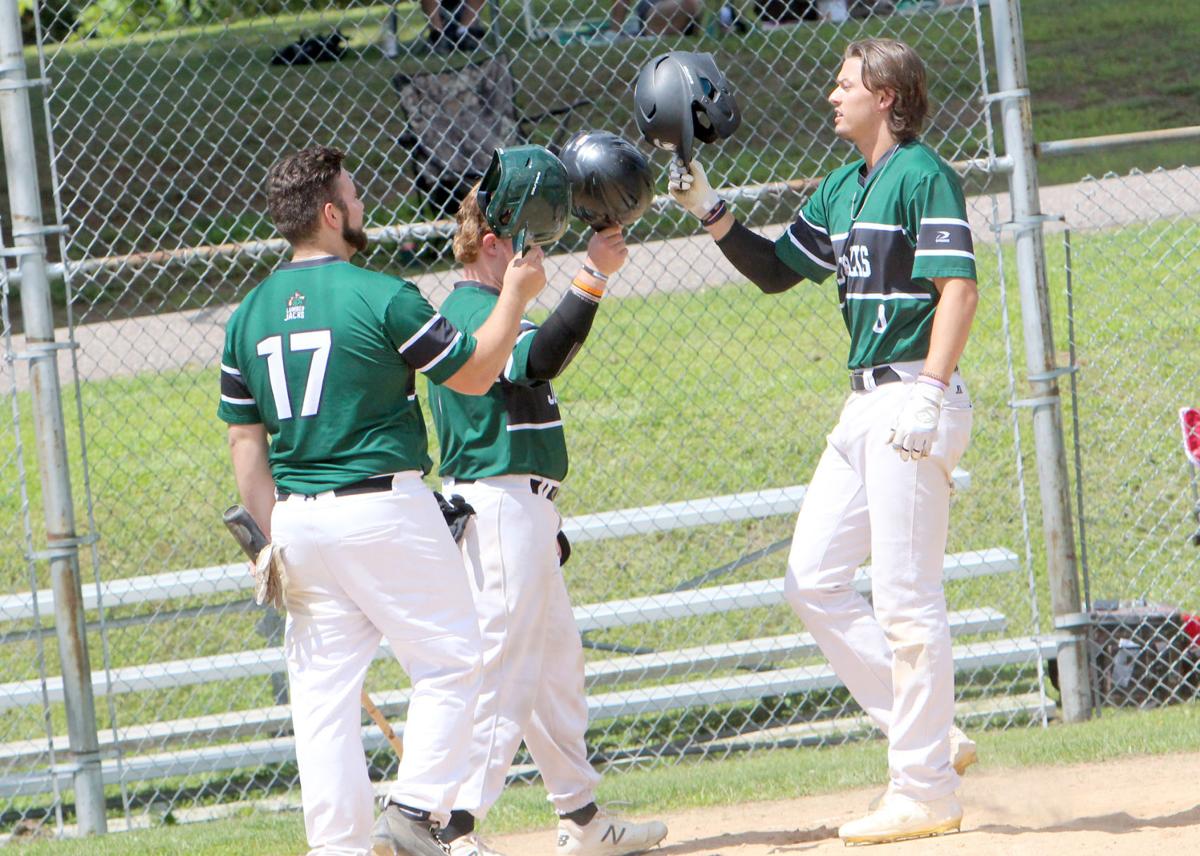 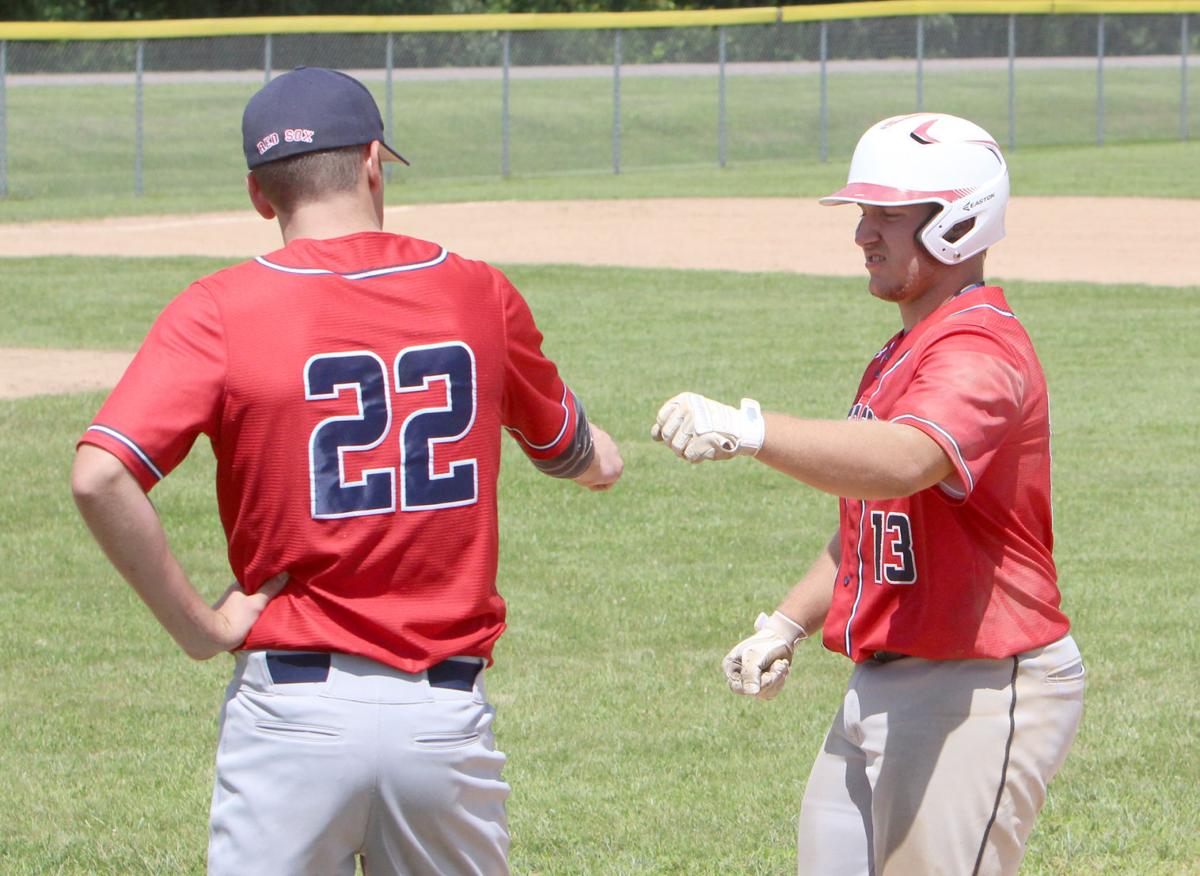 Cadott's Bennett Bowe (22) and Anthony Pogodzinski (13) celebrate after a base hit by the Red Sox on Saturday in Cadott.

But a new, yet familiar, face is making the most of it.

The ongoing COVID-19 pandemic has derailed plans for sports leagues of all kinds, including in the Chippewa Valley with the CRBL, which was set to play its 92nd season before opting earlier this summer for a nonsanctioned league schedule with nine of the 11 teams competing.

Previously, the LumberJacks played from 1983-2016 before moving to Eau Claire and rebranding themselves as the Rivermen. But in January, the LumberJacks were announced as the newest member of the league, joining as the Stanley Slammers and Augusta Athletics folded. The team had its sights set on a full schedule as a part of the North Division, but that all was thrown out the window during the pandemic.

Chippewa Falls has played more than a dozen games this summer and is using this year’s slate of games as a test run for next year.

“The kids are just excited to play, no matter where we go and when we play,” Chippewa Falls manager Wayne Franz said. “I think it’s a good thing, gives some (normalcy).”

The club is made up primarily of Chi-Hi graduates from the 2017 and 2019 classes with some other players added in.

“Building a program with guys from my class and the 2017 class is big to me,” said Nolan Hutzler, a 2019 Chi-Hi grad. “We’re all from Chippewa, and we’ve got a select few from other areas but we’re building something special I think.”

The team has mostly played road games against teams in and out of the league.

“We’ve got a really good group of guys coming together, and it’s just good to get out here and play because all the guys we have are very competitive and we like to win but we also just like being together out on the field,” Sawyer Lubs said.

The idea of bringing the ‘Jacks back started at the end of last summer with a large group of players jumping on board with the idea and committing to play.

“The Chippewa Falls LumberJacks competed in the CRBL from 1983 to 2016. During that 34-year run, they became one of the most successful and respected amateur baseball teams in the CRBL and across northwest Wisconsin,” CRBL secretary and Rivermen manager Andy Niese said in a press release from the CRBL announcing the addition in January. “As someone who played for Chippewa Falls from 1998 through 2016 and filled the responsibility of player/manager from 2006 through 2016, I’m very glad to see the organization return.”

The season is winding down for the team, but even in a year where the results don’t count like a standard year, Franz has been happy to see the progress the team has made in such a short period of time.

“We feel good about our team,” Franz said. “They’re young but getting in at least a semblance of a season this year is going to be big for us next year and hopefully have a true CRBL season.”

Overall the LumberJacks have one of the longest and most prestigious bodies of work in league history. Chippewa Falls entered this year second to Tilden in games won (389), fifth in games played (614) and with the fifth best winning percentage (.634) in the more than 90 year history of the CRBL.

This incarnation of the Jacks is not shying away from those lofty achievements.

“The LumberJacks are back, and we hope to really expand that next year and in the years following,” Franz said. “We are very proud of that LumberJack tradition and the bar that has been set and our goals are lofty and we hope to reach a lot of goals those past teams did.”

Red Sox on the road

The Cadott Red Sox have played a road-heavy schedule after a tornado caused severe damage to the team’s home field next to Cadott High School.

Cadott manager Rick Danielson said the team got a few home games in before the tornado and has played away from home in every game since then, including Saturday afternoon’s matchup with the LumberJacks in Jim Falls.

The Red Sox picked up a number of new players for this season, players that might not have been able to play because of prior commitments and have helped the Red Sox put together a solid schedule.

“Everybody is just happy to be able to play baseball this year,” Danielson said. “It would’ve been a really long summer if there was no games, especially some of these guys didn’t get to play high school and they were seniors this year. They were happy they were playing here and hoping they’d be able to try out for some other teams coming up. They’re just happy to get some work in.”

BLOOMER — Runs were at a premium on Saturday for the Beef River Bullfrogs and Bloomer Woodticks.

Following a brief burst of activity, the Chippewa Steel are once again playing the waiting game.

Several members of the Chippewa Falls LumberJacks look on during Saturday's game against Cadott in Jim Falls.

Cadott's Bennett Bowe (22) and Anthony Pogodzinski (13) celebrate after a base hit by the Red Sox on Saturday in Cadott.