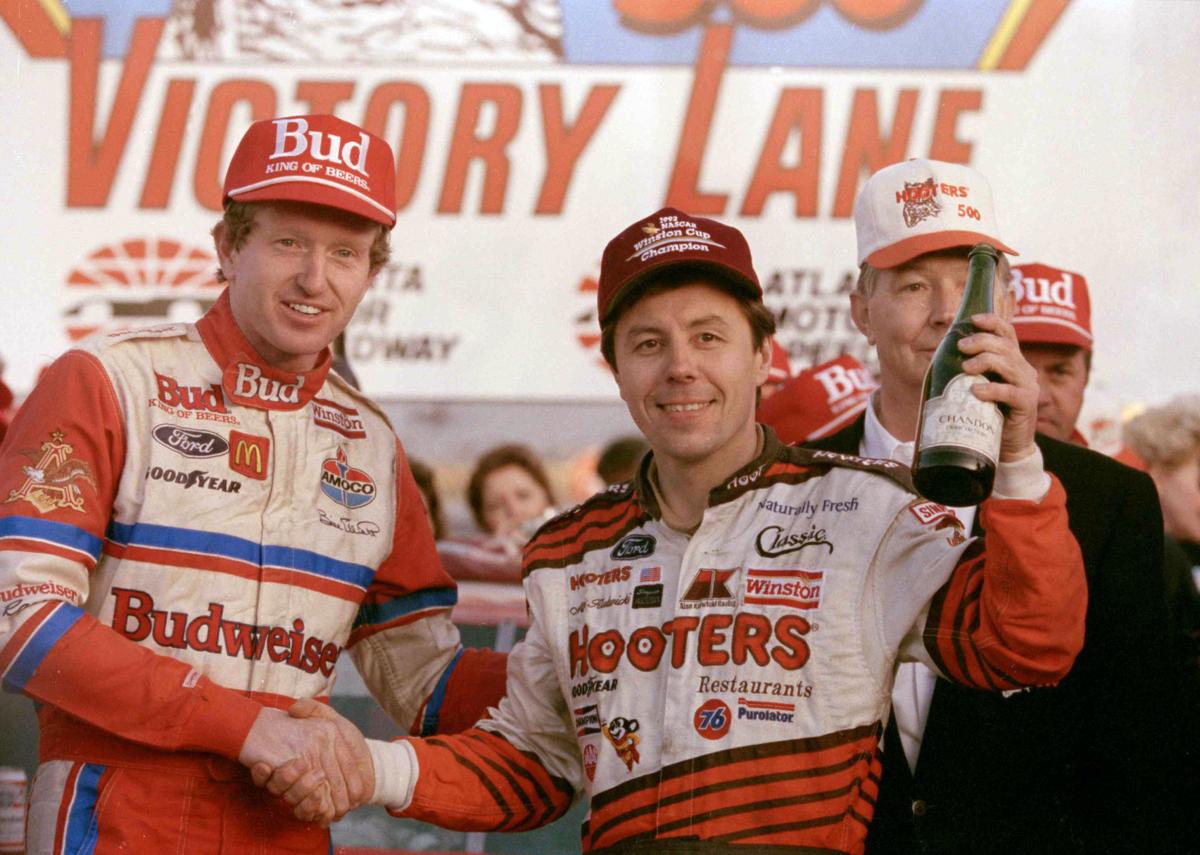 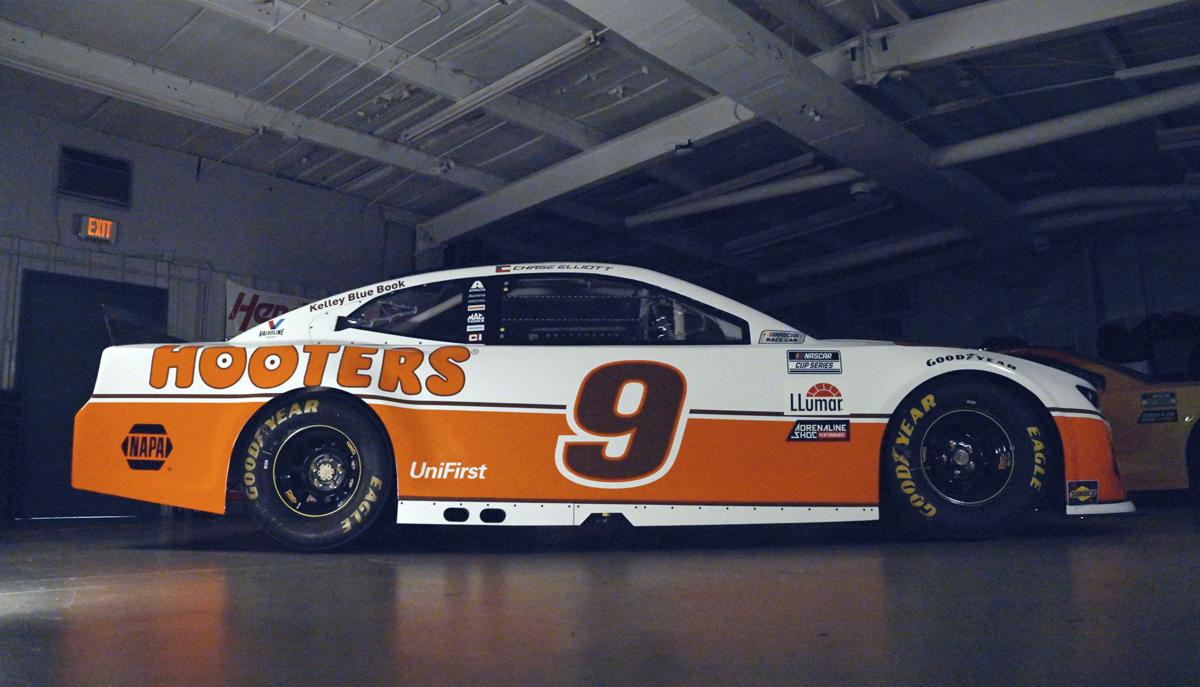 This undated photo provided by Hendrick Motorsports shows the car and paint scheme that Chase Elliott will drive to honor the late Alan Kulwicki at Darlington Raceway on May 9, 2021. (Henrick Motorsports via AP)

CHARLOTTE, N.C. — Chase Elliott has seen the picture somewhere — it's hanging in their family shop, Bill Elliott confirms — of his father shaking hands with Alan Kulwicki following the 1992 season finale.

The photo symbolizes a golden era for NASCAR and shows one driver losing with grace and accepting that the best man won.

That '92 closer is a benchmark race for NASCAR in that a nail-biting season came to an end during an emotional passing of the torch. Richard Petty retired that day, using Jeff Gordon's first Cup race to mark his farewell, all while six drivers showed up at Atlanta Motor Speedway in contention for the Winston Cup title.

Bill Elliott entered the race ranked third out of the six, trailing both Davey Allison and Kulwicki. He'd pretty much mentally conceded the title, but wasn't going to be embarrassed at his home track.

And so the title came down to the final stretch in a two-driver battle between Elliott and Kulwicki. It was Elliott first to the checkered flag but Kulwicki was second, and in leading a race-high 103 laps to Elliott's 102, Kulwicki earned a five-point bonus and the Cup.

Bill Elliott and Kulwicki met in victory lane and the photograph shows a smiling Elliott shaking hands with the champion as Kulwicki hoists an open bottle of champagne.

“It's weird, right? Because Alan beat Dad that year to win the championship,” Chase Elliott told The Associated Press. “But as I've been around and listened to stories about Alan and listened to my dad talk about him, there was a lot of respect there for him.

"Dad and his team didn't win, but they sure respected Alan greatly.”

Chase Elliott will honor Kulwicki this year in the Darlington Raceway throwback race, a tradition started in 2015 in which current drivers honor the sport's past. The reigning Cup champion will drive a No. 9 Chevrolet identical to the Hooters paint scheme Kulwicki drove in the only title race of his career.

Kulwicki was the beloved antithesis of NASCAR's good ′ole boy system. He was a Polish-American interloper from Wisconsin and a NASCAR independent who drove for his own team. Kulwicki was killed in a plane crash five races into the 1993 season on his way to Bristol Motor Speedway. He’d been at an appearance at a Hooters in Knoxville and flying on a Hooters corporate jet.

The 1992 season with Kulwicki was Hooters' first year as the full-season sponsor for a driver, and the restaurant chain scaled back its participation following Kulwicki's death.

“It's all bittersweet. We won the race but he won the war," Bill Elliott told the AP. “And then him getting killed in the plane crash, he really didn't have time to enjoy what he had accomplished. He was a tough competitor, he was a great champion and a big part of the sport.”

Hooters in 2017 signed on as a sponsor for Chase Elliott and features the champion in its national marketing campaigns. Although the sponsorship is for only three races a year, the branding with Chase Elliott resonates with NASCAR and now Darlington offers the opportunity for Hooters to honor both its current champion and its first champion.

Chase Elliott, the three-time reigning most popular driver through five full Cup seasons, has only heard about Kulwicki. He's 25 and was born at the tail of his father's Hall of Fame career — Bill Elliott, the 1988 Cup champion, won only four of his 44 career victories after the birth of his only son.

Bill Elliott views this pairing with Kulwicki's paint scheme as another chance for his son to learn about a simpler NASCAR. Like Kulwicki, racing was a family hobby for Elliott and both drivers liked to “do their own stuff.” Elliott followed Kulwicki as an independent driver/owner and ran his own team from 1995-2000.

“I'm sure Chase has an appreciation for it, but not the emotional part of that era,” Bill Elliott said. “Man, we lived it. You look back on it and I try to tell him, ‘Embrace where you are at. You know, it's going to be gone someday.'

"Shoot, I'm 65 now and look around wondering where it all went because it seems like yesterday it was '92.”

Can The New York Yankees cover the 1.5 spread?

Will Florida's Anthony Richardson be ready vs. Alabama?

Will Florida's Anthony Richardson be ready vs. Alabama?

Why are three undefeated teams ranked lower than they should be?

Why are three undefeated teams ranked lower than they should be?

This undated photo provided by Hendrick Motorsports shows the car and paint scheme that Chase Elliott will drive to honor the late Alan Kulwicki at Darlington Raceway on May 9, 2021. (Henrick Motorsports via AP)