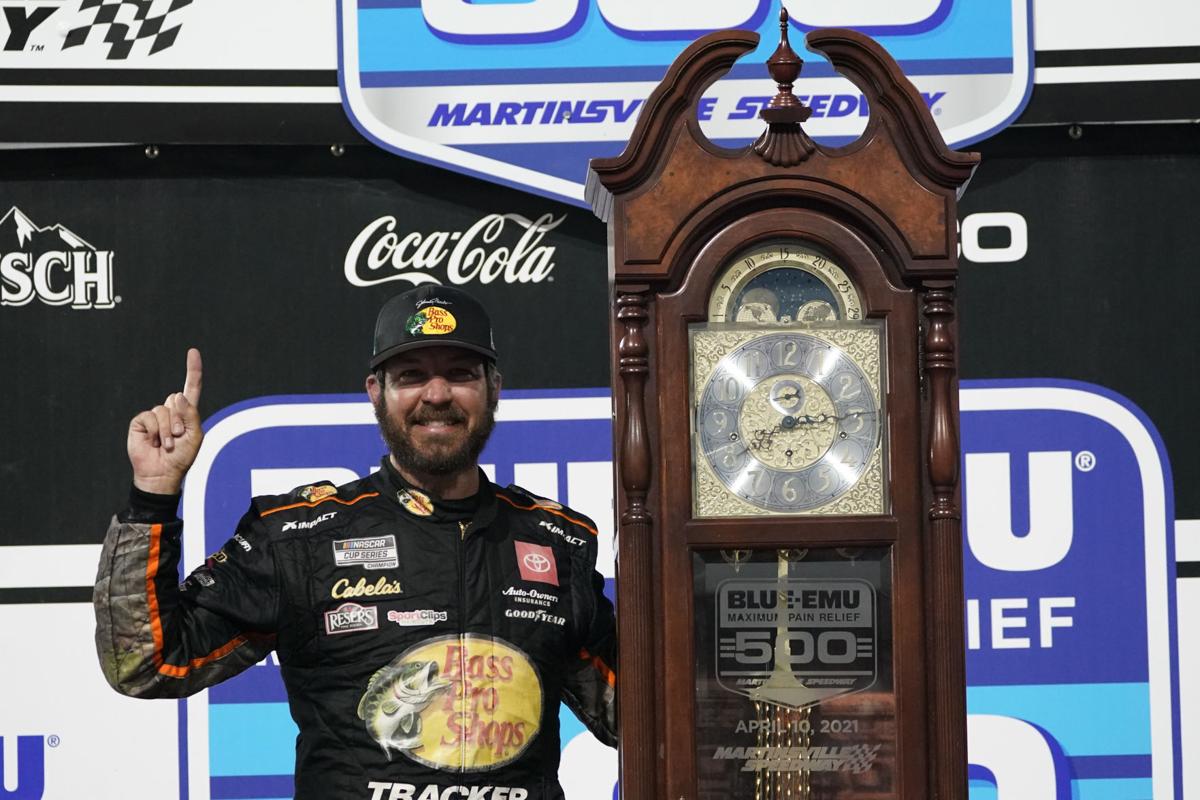 Martin Truex Jr. poses with the trophy after Sunday's race. He became the Cup Series' first repeat winner this season, having triumphed March 14 at Phoenix. 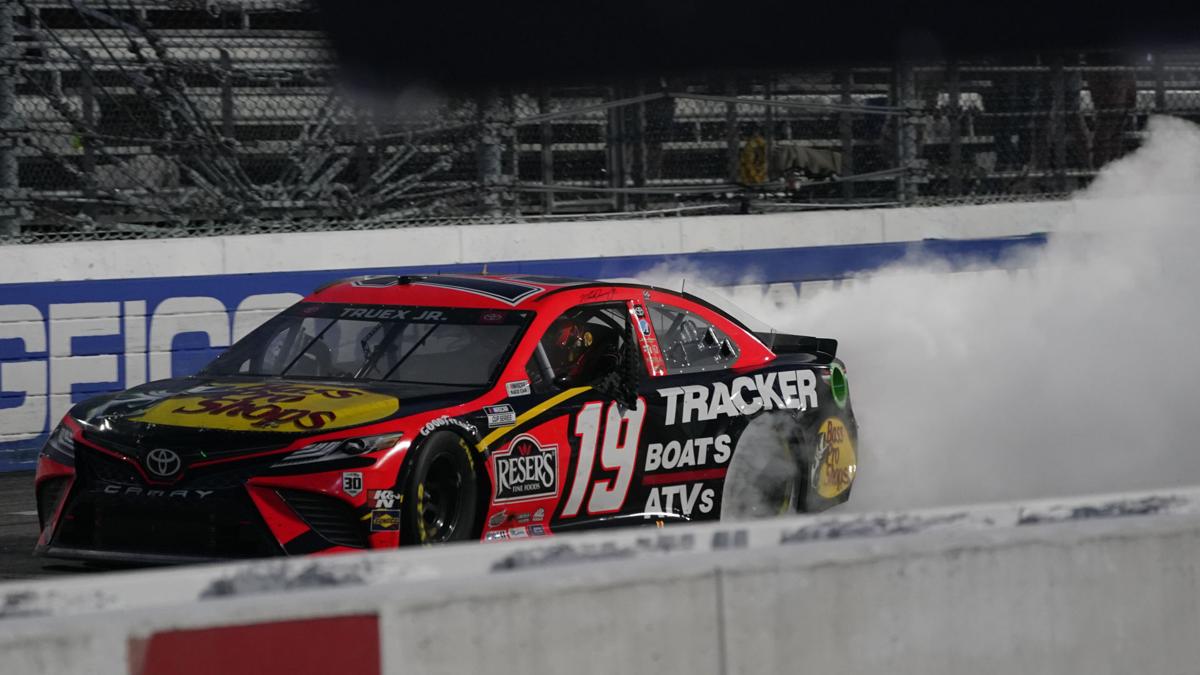 Martin Truex Jr. does a burnout after winning for the third time in the past four races at Martinsville Speedway. He led for only 20 laps.

MARTINSVILLE, Va. — Martin Truex Jr. admits to being surprised by his success at Martinsville Speedway.

Truex won a stirring, laps-long duel for the lead with teammate Denny Hamlin in the rain-delayed NASCAR Cup Series race Sunday, winning for the third time in the past four stops at the 0.526-mile oval — the oldest and shortest in the series.

“This place has become a playground for us I guess,” Truex said in Victory Lane. “We didn’t have the best car all day, but we just kept working on it and never quit on it.”

Truex, who nudged Hamlin repeatedly in the turns and tried to get to his inside on the straightaways without success, finally made the pass with 15 laps to go, ducking underneath Hamlin coming out of the second turn. He sailed off to victory without another challenge as Hamlin and Chase Elliott battled the rest of the way for second.

The race was postponed after 42 laps Saturday night, and was completed as the second part of a doubleheader that started with the completion of the rain-delayed Xfinity Series race from Friday night.

Elliott, who won here last fall on his way to winning the series championship, held off Hamlin for second. Hamlin was third, followed by William Byron and Kyle Larson.

“That was a lot of fun there at the end, racing with Denny,” Truex said about his Joe Gibbs Racing teammate. “We raced clean and we were able to come out on top.”

The Gibbs team had all four of its drivers finish in the top 10 as Christopher Bell took seventh and Kyle Busch 10th, leaving team owner Joe Gibbs excited and relieved.

“I was just praying that Denny and Martin didn’t get together running up front,” Gibbs said.

The outcome was not only disappointing for Hamlin, who had a dominant car and led 276 laps, but also for Ryan Blaney, who won the first two stages and led 157 laps but dragged an air gun out of his pit after the final stop and was sent back to 19th in the field.

Blaney rallied to finish 11th, but earlier, he and Hamlin were dominant.

Blaney passed Hamlin for the lead on Lap 75 and cruised to victory in the 130-lap Stage 1, and Stage 2 played out much the same. Hamlin was fast early in the run, pulling comfortably ahead, but Blaney eventually ran him down to win that stage, too.

“We had a really fast car for 20 laps or so, and then it would just kind of go away,” Hamlin said. “We just continue to run top-three every single week. Every stage, every finish — we’re right there. We just need to get a little better. We’re barely missing it.”

The race featured several drastic changes in fortunes, perhaps none bigger than for Joey Logano. He was in danger of being lapped at the end of the first stage, but gambled with others midway through the race by staying on the track to gain position when most of the leaders pitted.

It worked because another caution flew shortly thereafter, allowing him to pit for the fresh tires after most other teams already had and stayed near the front the rest of the way.

Misfortune was the case for Alex Bowman, Brad Keselowski and several others because of a major pileup on the backstretch involving more than a dozen cars on Lap 387. Bowman had gotten as high as second before getting caught up in the mess that ended his day, and Keselowski, a two-time winner at Martinsville, also had to call it a day after the wreck.

The accident started when Kyle Busch and Chris Buescher got together exiting Turn 2.

Daniel Suarez also was involved, and rode around the oval to the entrance to Turn 1, climbed out of his car when it caught fire and walked away as it burst into flames.

Is Sean Payton an early frontrunner for Coach of the Year?

Martin Truex Jr. poses with the trophy after Sunday's race. He became the Cup Series' first repeat winner this season, having triumphed March 14 at Phoenix.

Martin Truex Jr. does a burnout after winning for the third time in the past four races at Martinsville Speedway. He led for only 20 laps.