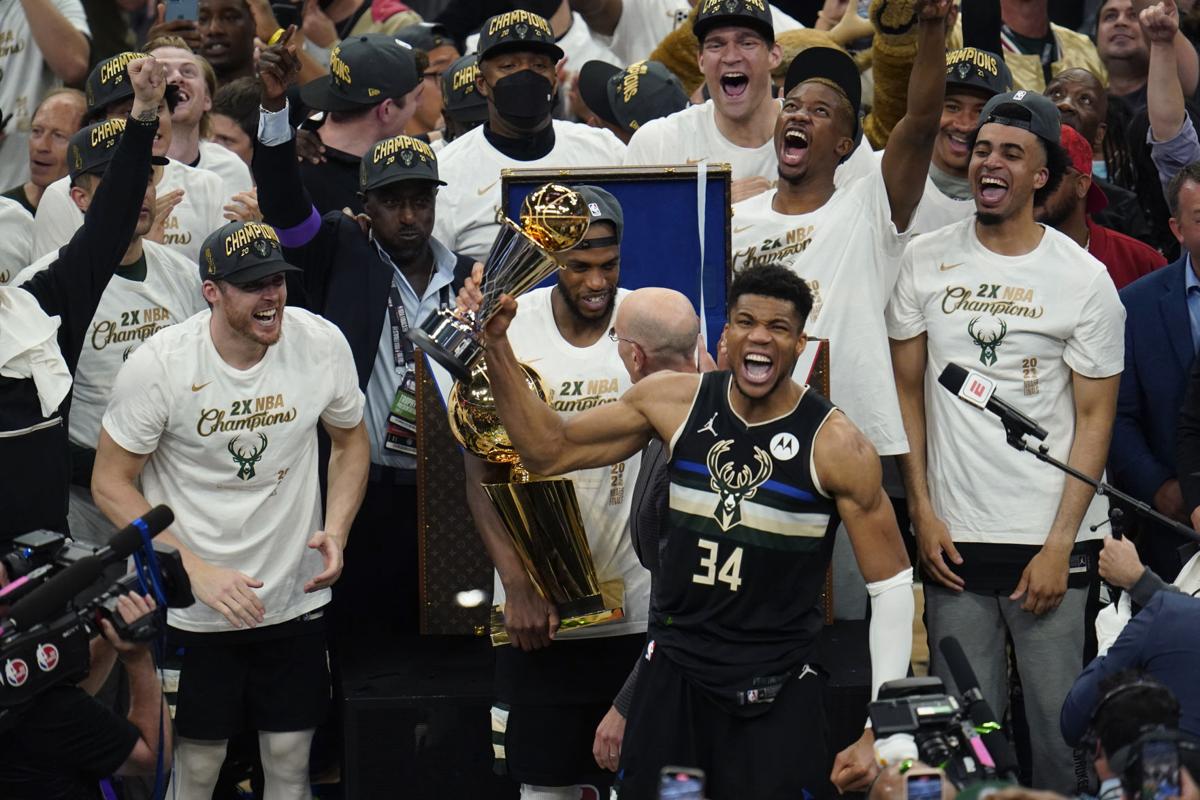 Milwaukee Bucks forward Giannis Antetokounmpo (34) holds up the MVP trophy after defeating the Phoenix Suns in Game 6 of the NBA Finals in Milwaukee on July 20. The Bucks won 105-98. 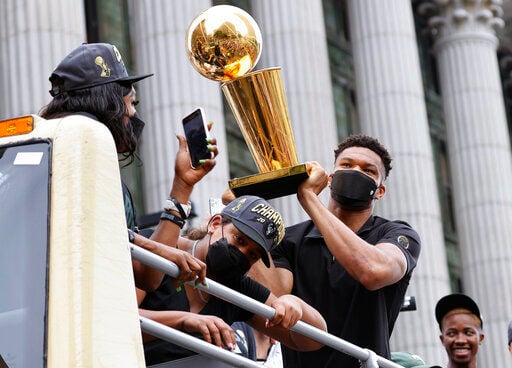 A lot can change in eight years.

But as the Bucks celebrate their first NBA championship in 50 years, it’s the path the team took to reach its title destination that can not only show a roadmap for others but also provide some confidence that if it could happen for Milwaukee, it could happen for any of the state’s other prominent teams.

Certainly the Green Bay Packers know this. The most prominent sports team in the state hoisted the Lombardi Trophy early in 2011 and will be a championship contender as long as Aaron Rodgers is under center for the team.

But the question is how long will that be? This week we learned the quarterback would return to Green Bay for his 17th season with the team after a tumultuous offseason filled with long-simmering frustrations bubbling closer to the surface. Rodgers will be the quarterback this fall for sure, but anything beyond that is hard to predict right now.

The other professional sports team in Milwaukee is doing well in its own right. The Brewers enter the weekend with a seven-game lead in the NL Central standings and bolstered their roster at the trading deadline. This year’s team isn’t built like most successful Brewers squads of the past, as it leans on pitching and defense for victories. All-Stars Brandon Woodruff, Corbin Burnes and Freddy Peralta anchor a dynamite rotation while Josh Hader and Co. hold down the bullpen once again. If the team can manufacture enough offense when needed, it certainly has the pitching for a lengthy postseason run.

The University of Wisconsin football and men’s basketball teams have had postseason success within their grasps in recent history as the football squad is a consistent Big Ten West Division contender and was a win away from an unbeaten regular season in 2017, an achievement that would’ve surely meant advancement into the College Football Playoff. Paul Chryst’s team looks to once again be poised for contention, though a tough schedule awaits.

The Badgers’ men’s basketball team made Final Four trips in 2014 and 2015, coming up agonizingly short of the title with a loss to Duke in the 2015 national championship game. Greg Gard’s team is quite young for this upcoming season, so a return to the stature of those teams might be hard to come by in the immediate future.

The other prominent programs in Madison, such as the Badgers men’s and women’s hockey teams and the volleyball squad, have either won titles of their own in recent years or have been on the doorstep of doing so.

Certainly all of these teams are ahead of where the Bucks were in 2013 when the team finished 38-44, making the Eastern Conference playoffs as an eight seed before being bounced in four games by the eventual league champion Miami Heat. It was prior to that series when then Bucks star and now team Nostradamus Brandon Jennings coined the phrase “Bucks in Six” in response to a question about his team’s chances against the high-powered Heat. Years later that phrase would become the fan base’s rallying cry.

But even though the Bucks made the playoffs several seasons around that time, they position the held within the state was worse than being a bad team — they were irrelevant. The franchise didn’t fully register on the state sports scale with many fans, and the team’s future in Wisconsin was even up in the air as ownership sought a new arena to replace the outdated Bradley Center.

Being stuck in the middle of the league meant the team didn’t have the draft capital to select a known game-changing prospect in that year’s NBA Draft. So the Bucks went outside the box and with the 15th pick made a truly game-changing move by selecting Giannis Antetokounmpo out of Greece.

Antetokounmpo was as raw as could be but had the drive and determination to be a superstar, and he continued to hone his craft into becoming a two-time league MVP who would ultimately put the team on his back to carry it to the championship promised land. Roughly a month after drafting Antetokounmpo, the Bucks made another franchise-altering move — though it wasn’t seen that way at the time — when the aforementioned Jennings was dealt to the Detroit Pistons for a package of players that included Khris Middleton.

Middleton, like Giannis, needed time to develop his game but did just that in becoming a two-time All-Star and cornerstone for a championship team.

The Bucks went 15-67 in the 2013-14 season before showing gradual improvement, earning eventual franchise stability with the selling of the team and the building of Fiserv Forum. The team was firing on all cylinders in the 2019-20 season with a 56-17 record before the COVID-19 pandemic shut down the league and the world for a period of time. Milwaukee never recovered once returning to play inside the bubble environment the NBA provided to determine its champion, bowing out in the second round of the playoffs to the Miami Heat.

This year’s Bucks team won the Midwest Division title for the third year in a row but entered the postseason under the radar before exorcising some postseason demons with series wins over the Miami Heat, Brooklyn Nets, Atlanta Hawks and Phoenix Suns to take the title earlier this month.

The NBA Finals clinching victory came in front of a packed state-of-the-art stadium in the heart of a revamped portion of town dubbed the Deer District, which expected an estimated 65,000 more fans. And fittingly it came in six games.

So what is the lesson to be taken from Milwaukee’s NBA championship?

A lot can change in a short period of time in the sports world, and just because something hasn’t happened in a while doesn’t mean it couldn’t possibly happen in the near future.

Brandon Berg can be reached at brandon.berg@lee.net.

Watch now: Graham Mertz says offense needs to step up for the defense

Watch now: Collin Wilder on his message to teammates after loss to Notre Dame: ‘Don’t you dare start pointing fingers’

Watch now: Collin Wilder on his message to teammates after loss to Notre Dame: ‘Don’t you dare start pointing fingers’

Milwaukee Bucks forward Giannis Antetokounmpo (34) holds up the MVP trophy after defeating the Phoenix Suns in Game 6 of the NBA Finals in Milwaukee on July 20. The Bucks won 105-98. 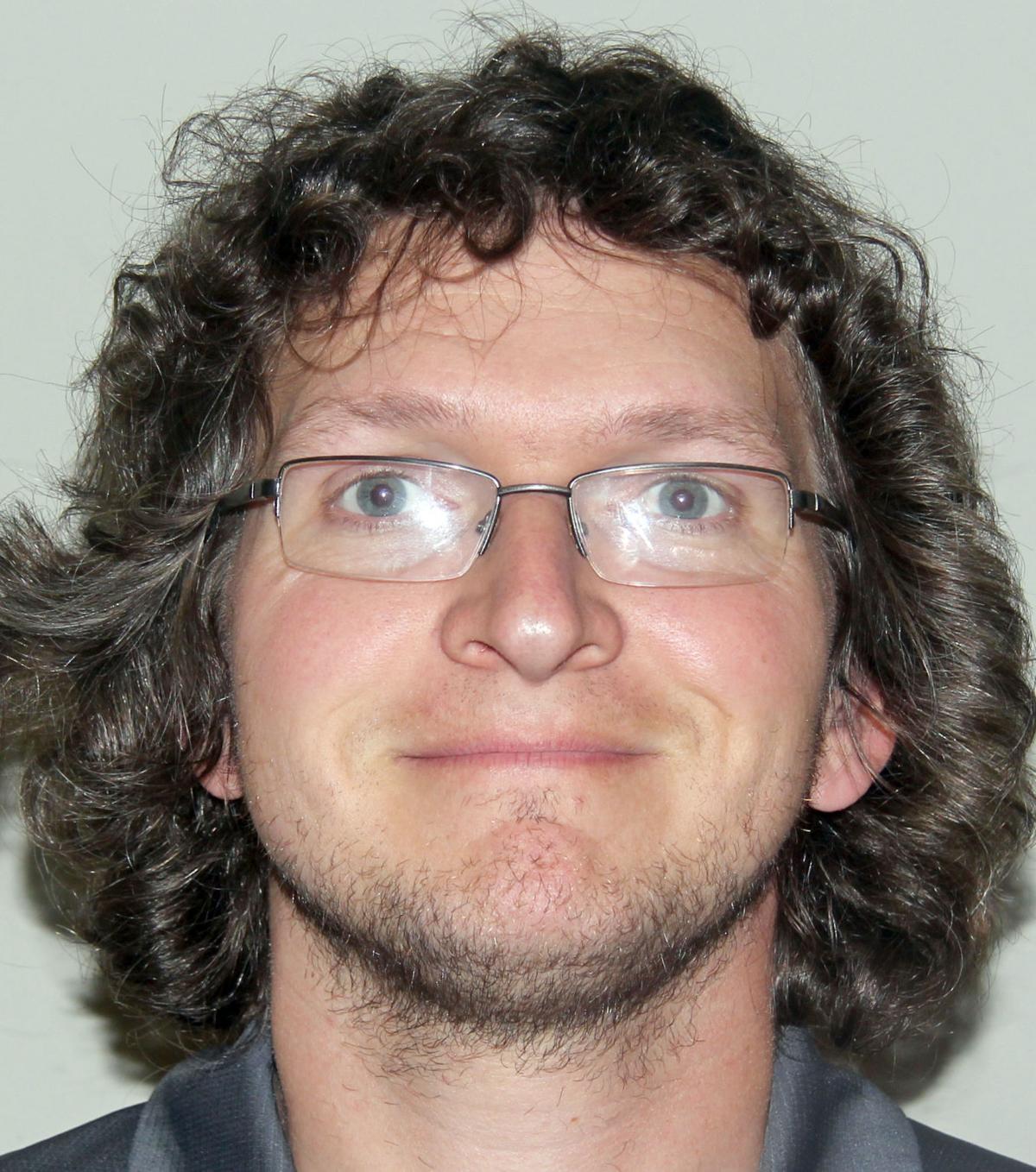