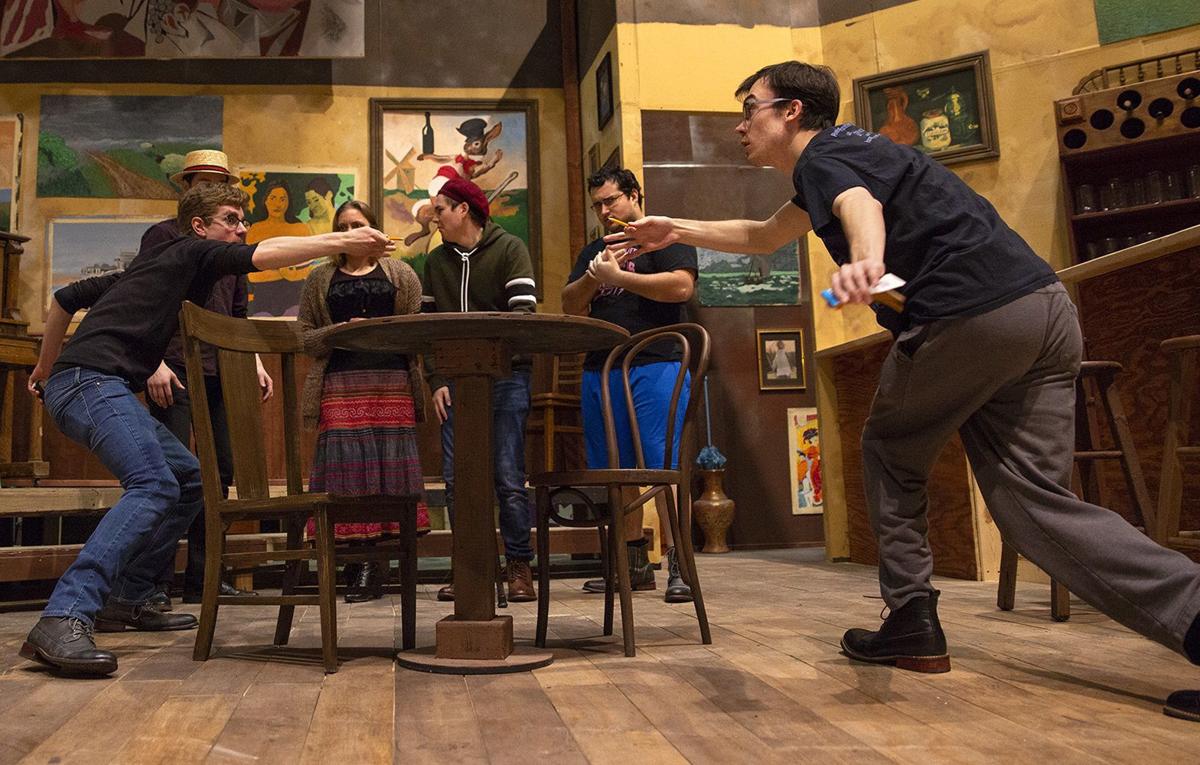 Will O’Brien, far left, as Einstein, disagrees with Picasso, performed by Derek Johnson, far right, during a rehearsal of the University Theatre’s latest production “Picasso at the Lapin Agile.” 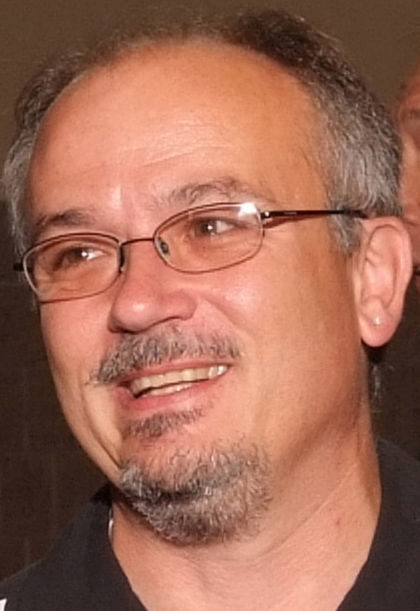 The creative process is celebrated in the latest University of Wisconsin-Stout Theatre production “Picasso at the Lapin Agile,” with humor and a bit of sparring between a celebrity of art and one of science.

Comedian Steve Martin’s comedy of historical fiction has Albert Einstein and Pablo Picasso meet in a Paris tavern in 1904, the year before Einstein’s theory of relativity and Picasso’s transition to cubism, to debate the value of genius and talent.

“Whether you are in the sciences or the arts, you are involved in a creative process,” said University Theatre Director Paul Calenberg. “The idea is to create a new thought, a new way of looking at the world through the equation or the paintbrush.”

In the play, when Picasso and Einstein start to become a bit haughty about their importance, a time traveler with blue suede shoes shows up to showcase another type of genius.

Calenberg said he wanted students to perform a show he thought faculty, staff, students and the community would enjoy.

“Comedy is the hardest script to write and the hardest play to perform,” Calenberg said. “It’s all about timing. When you have a script written by a comedic genius like Martin, you already have that written right in.”

UW-Stout sophomore Derek Johnson portrays the womanizing and arrogant Picasso. “In this show, Picasso is not a nice guy,” Johnson said, smiling. “He’s conceited. He knows he is talented, and he flaunts it. He definitely objectifies women. He thinks of women as someone beautiful to be painted but not talked to. It is a challenge to play that. He is definitely difficult. But it is fun to portray because he is so energetic and flamboyant.”

Johnson, who is majoring in computer science with a concentration in cybersecurity, hopes people will enjoy the play’s humor but also think about how both art and science have impacted the world.

He noted UW-Stout offers both art- and science-based degrees as part of an education that includes the liberal arts, including theater and music. That was very important to him when he was looking to continue his education.

Will O’Brien, a first-year student studying applied mathematics and computer science, portrays Einstein. “Einstein is a nerd,” he said. “It’s a stereotype, but I believe he breaks it because he is charming and quick-witted.”

O’Brien loved the script once he read it. “It brings two of the biggest parts of being human – art and science,” O’Brien said. Science asks questions that aren’t always necessary for survival. Art is for beauty and expression and again not a necessity for survival. Yet both are important for humanity, he noted.

Cast members and their majors are:

The scenery for “Picasso at the Lapin Agile” was created by Assistant Professor Jennifer Sansfacon. “The audience is going to feel like they are at a corner bar in Paris,” Calenberg said.

The show includes a special effect when a painting is revealed as part of the script, Calenberg said. Costumes were created by Barb Weisenberger of Eau Claire. The 75-minute show will run in one act with no intermission.

Harvey Hall Theatre, in UW-Stout’s Harvey Hall, is in the League of Historic American Theatres.

An artist devoted to his home state — and everything it has to offer — is set to take the next step in his music career.

A Chippewa Falls man who head-butted his attorney in the courtroom in September 2017, punched Chippewa County Sheriff Jim Kowalczyk, and got i…

When John Kinville found that a women’s Ku Klux Klan chapter existed nearly a century ago in Chippewa Falls, his reaction was what you might expect.

The Chippewa Falls City Council is once again looking at extending a frontage road along the north side of Business 29, which would connect Ch…

Will O’Brien, far left, as Einstein, disagrees with Picasso, performed by Derek Johnson, far right, during a rehearsal of the University Theatre’s latest production “Picasso at the Lapin Agile.”